The CryptoVerse Expo 2022 event was a great opportunity for us to learn about new projects in the world of cryptocurrencies. At the same time, we supported our client who had his own stand and for whom we planned a lot of activities for that day.

During the 10-hour conference, we answered questions about the project and invited event participants to follow the brand on social media. We also prepared the client to appear in the media and we covered the event.

The client is a rising star in the Metaverse. It creates a super-realistic space that allows people to make new friends, get to know brands, and create their own world, sharing it both internally and externally – on social media. The main goal of the project is to create a Metaverse platform where users will live their lives as Virtual Influencers on all social platforms and will have extensive possibilities to create characters and adapt their appearance and lifestyle to their preferences.

Goals and Challenges of the Project

Due to the fact that the client started the project a few weeks earlier, as an agency, we wanted as many people as possible to hear about it during the CryptoVerse Expo. It was a new, hot and trendy idea that many people wanted to talk about. From the very beginning, we focused on communication in two languages – English and Polish. Our goal was to show the event in the best possible way on social media.

In cooperation with the organization of the event, we focused primarily on influencer marketing and media relations. It was a big challenge to prepare a schedule adapted to all participants, which had to take into account the hours of performances on stage, lectures, and debates. In just 10 hours, we had a lot of activities, interviews, and talks planned.

Implementation of the Project

Most of the agency’s team took part in handling the event. We wanted everything to be buttoned up! Each of us was responsible for a different customer service sector at this event. We divided the tasks into:

From the very morning, we had meetings with editorial offices, such as Wprost or Comparic.pl. These were video interviews, which were later published on news portals and on YouTube. Between the meetings, we arranged two collaborations with Polish influencers from the cryptocurrency industry – Krypto Ekipa and Mike Satoshi. 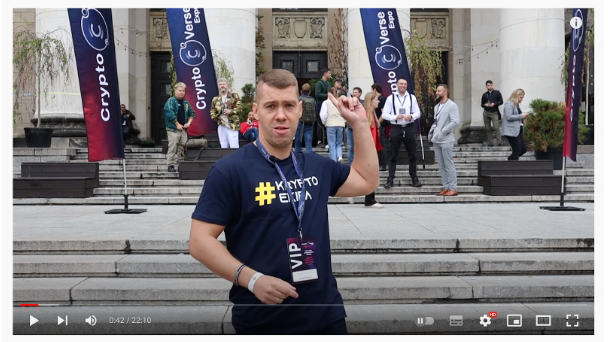 The Effects of Our Activities

During that day, we generated several valuable publications – both in the form of articles and videos. The client’s social media also gained interesting content, and many new people learned about the project. We also met inspiring people and had another opportunity to develop organizational skills in such a large project.

Let’s create something together!

You’ve got an idea for a project?
Do you want to talk about cooperation opportunities?
Contact us!

Check out our projects

Do you want to know more about our activities?
Read our Case Study section, which illustrates our work even better!

This website uses cookies to improve your experience while you navigate through the website. Out of these, the cookies that are categorized as necessary are stored on your browser as they are essential for the working of basic functionalities of the website. We also use third-party cookies that help us analyze and understand how you use this website. These cookies will be stored in your browser only with your consent. You also have the option to opt-out of these cookies. But opting out of some of these cookies may affect your browsing experience.
SAVE & ACCEPT